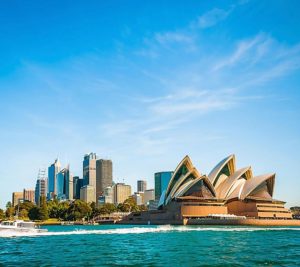 Australia follows a tax system that is progressive, which is very much like the system in the US, whereby as your earnings rise, the tax rate for each additional income dollar goes up too. Australia’s tax rates are generally higher than the tax rates in the US.

Superannuation is a mandatory retirement program, contributed by both employer and employee. Contributions from employees are voluntary but they can make additional contributions. These contributions are tax-deductible in Australia but not given special tax treatment in the US. Permanent residents and citizens of the US must include these contributions in their global income when filing a tax return in the US. Employers must contribute 9.5% of the basic wages of those employees who make AUD450 or more per month. Superannuation funds can only be withdrawn after retirement age or when special conditions have been met.

In Australia, the corporate tax rate is 28% for companies that generate revenue less than AUD 2 million and must be pre-paid every quarter depending on what is expected to be owed. Even if your company is not incorporated in Australia, as long as it conducts business in Australia and is owned by an Australian, it is considered an Australian corporation.

The Australian tax year is from 1st July to 30th June. This is crucial, as you have to do an income conversion to a calendar year to file your income tax returns in the US. You must file your tax returns in Australia by 31st October each year unless you extend it through a professional tax agency. If you hire a tax agent, you must register as a client of the tax agency by that date. Once registered, you get an extension of time until June 5th of the next year.  US taxes are generally due June 15th for Americans living abroad and they can file an extension until October 15th. This can often create a timing issue for Americans who have to wait until their Australian taxes are filed in order to file their US taxes.  Americans living abroad often tax advantage of the extension until October 15th and they often request a second extension from the IRS when necessary.  However, the extension is only an extension to file, not to pay.  If an expat thinks he pay owe taxes, then he should make an estimated payment by April 15th and if he overpays, then he will receive a refund when he files.

Australia and the US have a totalization agreement which is a type of reciprocal tax treaty for social security payments. Individuals who pay self-employment taxes to Australia can be exempt from paying social security taxes to the US and avoiding double taxation. While the individual tax issues are included in the treaty including provisions for granting rights to the governments to impose taxes on income depending on from which country the income was obtained, the bulk of tax treaty rules are about property and commerce.

The major factor in the US Australia tax treaty is the guidelines for protection from double taxation. Article 22 establishes the rules for protection from double taxation on family allowances, childcare rebates, 1st home savers, environmental offsets, education offsets, and more. In addition, the foreign tax credit gives you a dollar credit for the taxes paid for accrued in Australia. The foreign tax credit is often a better option for Americans living in Australia because Australia’s tax rate is generally higher than the US tax rate.  This means that expats living in Australia can us foreign tax credits to reduce or eliminate the amount of taxes they owe in the US.

The Australian and US governments share taxpayer information. The penalties for evading taxes for expatriates are tough. If you are an American citizen, dual citizen, or a green card holder and you have been in Australia for a while but were not aware of the fact that you have to file for US taxes, the you may be a candidate for the IRS Streamlined procedures. The IRS Streamline procedure program will be considered you up to date with your US taxes without facing any additional penalties. Send us an email or give us a call if you have any questions about your US taxes while living in Australia.