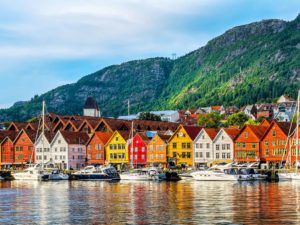 Norway is rich in beauty, resources, skiing, fjords, and free public services. Oslo, the capital, rates as a pricey city to live in because Norway has high taxes. But Norwegians seem happy to live with this payoff. It is estimated that about 9,000 American citizens are living in Norway. If you are an American citizen planning to move to Norway to enjoy a high living standard, it is important to know the tax laws not only in Norway as expatriates but also in the US.

Citizens of the US living in Norway face additional demands as the US is among a few governments that tax overseas income earned by their citizens and permanent residents. If you are an American citizen or a legal permanent resident or an American Norwegian dual citizen living in Norway, you are required to file a US tax return and report global income from all sources to the IRS every year. Even if you do not owe any taxes in the US, you must file a yearly tax return.

All US green card holders and citizens who earn a minimum of USD10,000 in Norway are required to file a federal tax return in the US using form1040. Even if you don’t have to pay any tax to the US government, you still have to file an IRS tax return if your income is over the filing threshold.  This amount changes every year.

If you have a gross total of at least $10,000 USD in a foreign bank or investment account at any time during the tax year, you must file IRS form FinCEN Form114, or FBAR, which stands for Foreign bank account report.

Along with the usual tax return for income, many US expatriates must also submit returns disclosing assets that are held in Norway. Specifically, if you have assets abroad worth at least $200,000 USD, excluding your house if it is registered in your name, you are required to file and declare them using IRS form 8938.

US tax due dates

US tax returns are due by the 15th of April. However, if you reside abroad as an expatriate, your return is due on the 15th of June, because you get an automatic extension of 2 months. Furthermore, you can get an extension until the 15th of October if you submit Form 4868 before the 15th of April to avoid being charged interest and penalties.

As a US expatriate in Norway, you are considered a permanent resident if you are in the country for at least 183 days within a year, or at least 270 days within 3 consecutive years. A US expatriate who lives in Norway for less than the above-mentioned days will not be considered a resident for that year. If you are in the country for less than 6 months during your 1st year there, you will be considered a non-resident during that year. Citizens of the US living in Norway are taxed on their global income, except for certain foreign workers in the oil industry. Non-residents of Norway pay taxes only on income obtained from Norway.

If you are a Norwegian resident you will owe Norwegian income taxes. Norwegian income is taxed at a rate of 23% to 39% depending on your income. Norway’s income tax includes a base rate and a step-tax, which applies depending on the particular income bracket. A US expatriate who is spending under 2 years in Norway receives a 10% deduction on the taxes.

Employment income is taxed at 25%. this includes the national insurance contribution of 8%. The tax is settled when it is deducted at the source and reported by the employers. Employees do not have to submit a tax return, nor can they claim any deductions or receive a tax assessment report.

By law, the majority of US expatriates who live and work in Norway must be part of the Norwegian national insurance scheme. Covered in the scheme are the pension and a medical plan. Employees must contribute 8.2% of their income to the plan. Self-employed people must make a tax contribution of 11.4%. However, you may be exempt from the mandatory requirement to contribute to the scheme according to the tax treaty agreement between the US and Norway.

There has been a simplified and tax scheme in Norway since 2019. The scheme is meant for expatriates in Norway. It is called PAYE, which stands for pay as you earn. During the 1st year in Norway, most foreign workers who meet the criteria automatically belong to the PAYE scheme. However, the scheme does not apply to offshore workers, foreign seafarers, workers who use the Nordic treaty, and workers who have taxable income from property or businesses in Norway.

The Norwegian tax year is more or less the same as the US tax year. Norway tax authorities send taxpayers a tax return each spring. These returns include information from the previous calendar year. You must complete and submit the tax return by the 30th of April.

The US and Norway have a tax treaty in place, whereby the vast majority of income from overseas is exempted from taxes in Norway and instead only gets taxed by the country from where the income originates. Also, Norway allows a foreign tax credit for US expatriates that helps reduce or eliminate double taxation on overseas income that is not exempted from a tax treaty and limits required tax withholding. Preparing a tax return following proper tax planning would allow you to use these and other strategies in minimizing or eliminating tax liability.

If you are paying tax in Norway, you are also liable for US taxes. Fortunately, there are several exemptions and exclusions available to prevent you from paying tax on the same income to the IRS. Generally, there are 3 ways you can lower your US tax liabilities. The 1st way is through the Foreign earned income exclusion. It allows you to exclude some amount from your overseas earned income on your US taxes. Specifically, the Foreign earned income exclusion lets you omit the 1st USD100000 from your US tax if you prove that you are a resident in Norway. The 2nd way is the Foreign tax credit. It allows you to offset the dollar-for-dollar taxes paid in Norway with your US expatriate taxes. In other words, it gives you a $1 credit for every dollar of tax paid in Norway. The 3rd way is Foreign housing exclusion. It allows you to exclude from your US expatriate taxes certain amounts paid towards your household expenses that happen as a consequence of living in Norway.

Norwegian and the US governments share taxpayer details due to the law called FATCA, and Norwegian banks pass on information about US account holders to the IRS. Hence, it’s not worth omitting or not filing anything on your return. The fees and penalties for incomplete or incorrect filing for expatriates can cost you an arm and a leg, to say the least.

In case you didn’t know that you had to file a tax return in the US, don’t worry. The IRS Streamlined procedure program allows you to catch up on it without paying any penalties. There are also relief procedures for certain types of former citizens, for example, people who intend to relinquish their US citizenship or who have already done so or those who wish to comply with their US tax and reporting obligations to avoid being taxed by the IRS as a covered expatriate. We strongly suggest that if you have any doubts about your tax situation as an expatriate living in Norway, you should give us a call or send us a message.